Well, the beginning of this story goes back to the beginning of August 2019 (not so far eh?). I came across this interesting article Don’t Create Objects That End With -ER , with the title Don’t Create Objects That End With -ER. Ever since I read that, I had a lot of thoughts rumbling in my head that ultimately said: “something in this post doesn’t add up!”. Here I am penning down those thoughts.

At the very beginning, I should mention that this is not any sort of a challenge to the person who wrote that article. From his philosophy of the Object-Oriented Paradigm, he probably should be having many years of experience, which is pacific ocean compared to the jug of water I have with me. This is actually a question. I will end this article with a question mark, hopefully, to revisit and update this with the answers, if and whenever I find them.

There is an interesting pick of an example. In the same words from the article

And, the things that follow this, are what made me having a problem. Let’s take a look at that as well. 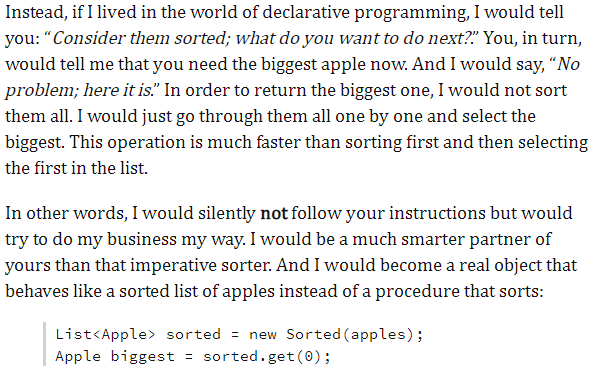 Haven’t noticed anything yet? Okay, let’s try to jot down the facts.

From the way I see it, scenario 2 has at least the following grey areas.

All of these I can boil down to the following.

Who will ask the question “Consider them sorted, what do you want to do next”?

Is there anyone who knows the answer? Please feel free to comment. Until next time!